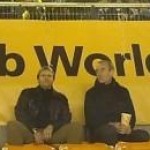 scouts = These are people employed by a club to look at other teams or players. In the example above, Liverpool are probably interested in a couple of players and have sent their scouts to check them out. More examples on this word here

fielding = Here the word ‘field’ is used as a verb – to field – and means that he was played or selected (‘…selecting/fielding Ibsen…).

all the action= This phrase here simply refers to the match, i.e. all of the match action that will take place.

There are some more examples of US soccer language in this BBC article.
The Winningest team? An offensive player?